Naoko Fujimoto translates her poems (that are written in English on flat paper) into words and images to create a contemporary picture scroll. The picture scroll in Japanese is Emaki (eh-MA-kee) and the style has been popular since the 7-16th centuries in Japan. It is still a widely recognized art style in Japan and the rest of the world. Emaki is akin to a current graphic novel / poetry / comic. One of the most famous Emaki is the Tale of Genji, which is a fictional (perhaps gossip) story about a handsome son of the emperor.

The graphic poetry project is also meant for the viewer to transport their senses from the flat paper and bridge the gap between words and images that will connect with their physical counterparts. Like a historical Emaki, there are side stories hidden behind some of the main graphic narratives— be they comedic or serious— for audiences to interpret. All of the details (choice of words, origami paper, or  styles) have a specific meaning to contribute to the whole.

In June, 2016, Naoko Fujimoto decided to take a year off to be a full-time poet and artist. People around her asked why she was leaving a stable job, and if she was going to be a starving artist. She wanted to find out how far she can succeed as a poet and artist. After all, if she gets lost, she can just come back to what worked before.

During the year, she had opportunities to not only read books, but also explore and live with classic and contemporary works, such as the Massachusetts Museum of Contemporary Art, Metropolitan Museum of Art, San Francisco Museum of Modern Art, Art Institute of Chicago, Tokugawa Museum, and Museum of Contemporary Art Tokyo. There, she revisited her idea of how she could create an effective melding of poetry and art; perhaps, words and images.
The following, entitled "The Duck's Smile", was her first attempt. She wrote an original poem for a project named, "Killing Sally McHill", which was a protest against common violence hidden around the house, school, office, and society. "The Duck's Smile" was specifically written about a hierarchy in a small community between the narrator and Sally. Her first graphic poem adapted a written poem into a graphic narrative. The poem started from the top left corner and progressed to the bottom right. It took a simple black and white art approach, but did not quite embody how she wanted it to be represented.

Graphic poetry is the melding of word and image

Naoko Fujimoto researched art works of inclusions of “word” and “image” such as László Moholy-Nagy, Hiroshige Utagawa, William Blake, Francisco Goya, and many other writers and artists. Then when she observed works by a German painter and sculptor, Anselm Kiefer, she understood that poetry must have explosions of creativity. Coincidentally, she had the chance to attend a workshop with Robin Coste Lewis, who critiqued the poems to be tight in structure, but reminded to forget about grammar and rules from time to time to experiment freely.

So she chose to adapt a traditional Japanese Emaki style (an illustrated narrative art). The original poem was carefully scattered specific phrases or implied images were selected, with the rest being ignored (like the poetry erasure technique). She traveled to find paper and objects, such as supermarket advertisements, birthday gift wrapping, postcards, origami, magazines, and other materials rich in color and texture. She wrote about relatable life conflicts, so using common objects in turn grounded her graphic poetry.

A closer look at the graphic poem "Radio Tower" 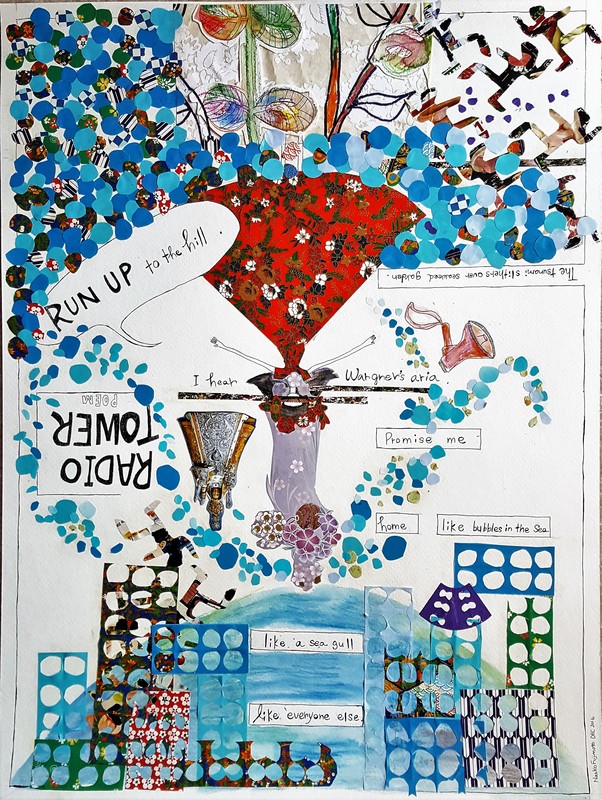 "Radio Tower" was written based on the Tohoku earthquake and tsunami on March 11, 2011, and devoted to Miki Endo. She was a public worker who served in the Crisis Management Department. On that day, she made her emergency announcements until her building was pushed away by the tsunami. (You-tube has a recording of her brave voice, and one may see most of the building leave its steel structures behind.) Unfortunately, Endo could not return to her family and friends.
RADIO TOWER

Run up to the hill,
I repeat it from the radio tower.

The tsunami slithers over the seaweed garden.
A child is held in its mother’s arms.

When the microphone slips from my hand,
clay seals my mouth. I hear

Wagner’s aria in my skull.

glitter under the stardust. Promise me
home like bubbles in the sea,

like everyone else.
Compared to the original poem, words and phrases were selected with an erasure technique, some to be represented by visuals and others to be written out. The choice of words and images for the graphic poem is meant to engage the audience's senses. Viewers may draw emotions from triggered memories, and use them to stimulate further thinking of what those details mean.

All the details and choices of the composition, even the materials used, are carefully selected. For example, in "Radio Tower", the blue bubbles graphically portray the chaotic nature of a tsunami surrounding a woman. Some words are upside down like trembling waves. Empty buildings stand tall, but desiccated, on the Earth.

On the top right, there are people running away— some are underneath blue origami paper— these people were made from supermarket advertisements. They all ate healthy, used better products, or budgeted well for their family for when a crisis (or death) comes, yet some were consumed by the waves regardless. In the middle left is an upside-down Saint Mary, as even God-like figures cannot save them all. (Mary’s picture came from St. Paul’s Church in Antwerp, Belgium. This church supported the Kobe earthquake survivors in 1995.)

In graphic poetry, visual images can express narrative aspects beyond words. Clovers grow. Their dewdrops, she became like a plant, with roots growing into the universe, and her arms leaving the earth behind without her microphone. She is an invisible tree stretching and searching for her home.

Enjoy watching her interview at Poetry Today with City of Highland Park PEG Access TV's Jennifer Dotson. She spoke about poetry, graphic poetry, RHINO, Tupelo Press, "Home, No Home," and herself (and her dress designed and made by her mother).